Do you miss social engagement? Join us as we pilot an environmentally focused book club. Read the month’s selected book, find a cozy place in your house and join us on a Zoom call as we discuss the book and how it connects to current environmental topics.

Participating is easy and doesn’t require any great literary thinking. The hope is that the readings will encourage you to look at nature and the environment from a new perspective. Each month we will have an informal discussion on how you connected with the book, how the book relates to current issues in our world and what actions we can take on a small scale to address those issues.

To sign up and follow along with any pre-meeting discussions, join our 1000 Islands Reads Facebook Group. Visit the Kaukauna Public Library website or your own local library to borrow copies of the book club books. 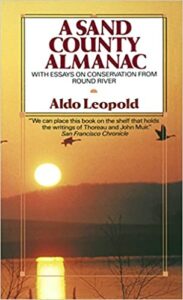 A series of astonishing portraits of the natural world, A Sand County Almanac explores the breathtaking diversity of the unspoiled American landscape at the peak of its beauty and majesty. Conjuring up one extraordinary vision after another, Aldo Leopold takes readers with him on the road and through the seasons on a fantastic tour of our priceless natural resources – the mountains and the prairies, the deserts and the coastlines – ever mindful of ecology and environmental preservation. A classic collection, A Sand County Almanac is a stunning tribute to our land and a bold challenge to protect the world we love.

If you don’t have access to a copy of A Sand County Almanac, you can download a PDF version of the story HERE

The Nature Principle by Richard Louv

For many of us, thinking about the future conjures up images of Cormac McCarthy’s The Road: a post-apocalyptic dystopia stripped of nature. Richard Louv, author of the landmark bestseller Last Child in the Woods, urges us to change our vision of the future, suggesting that if we reconceive environmentalism and sustainability, they will evolve into a larger movement that will touch every part of society.

This New Nature Movement taps into the restorative powers of the natural world to boost mental acuity and creativity; promote health and wellness; build smarter and more sustainable businesses, communities, and economies; and ultimately strengthen human bonds. Supported by groundbreaking research, anecdotal evidence, and compelling personal stories, Louv offers renewed optimism while challenging us to rethink the way we live.

Dellarobia Turnbow is a restless farm wife who gave up her own plans when she accidentally became pregnant at seventeen. Now, after a decade of domestic disharmony on a failing farm, she seeks momentary escape through an obsessive flirtation with a younger man.

She hikes up a mountain road behind her house toward a secret tryst, but instead encounters a shocking sight: a silent, forested valley filled with what looks like a lake of fire. She can only understand it as a cautionary miracle, but it sparks a raft of other explanations from scientists, religious leaders, and the media. The bewildering emergency draws rural farmers into unexpected acquaintance with urbane journalists, opportunists, sightseers, and a striking biologist with his own stake in the outcome.

As the community lines up to judge the woman and her miracle, Dellarobia confronts her family, her church, her town, and a larger world, in a flight toward truth that could undo all she has ever believed.